Heads up! This page uses features your browser doesn’t support. Try a modern browser like Firefox or Chrome for the best experience.

Next: Find the Elements 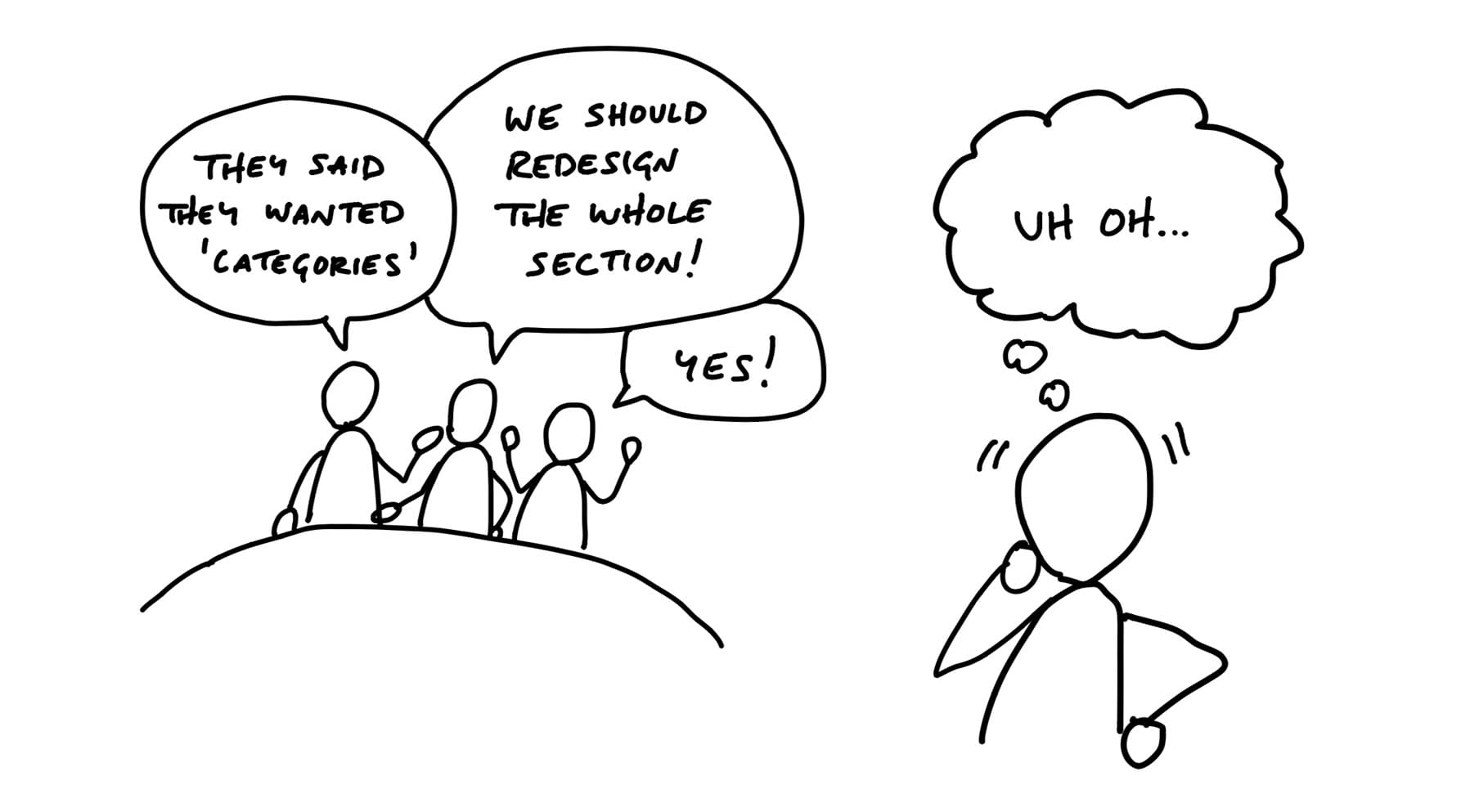 The first step of shaping is setting boundaries on what we’re trying to do. The conversations we have are going to be entirely different if people think we’re talking about a small improvement or a major redesign.

The conversation about building a feature always starts with a raw idea, like “customers are asking for group notifications.” Before we all go down the rabbit hole discussing ways we can solve it, we should first set some broad terms on the discussion to make it productive.

Sometimes an idea gets us excited right away. In that case we need to temper the excitement by checking whether this is really something we’re going to be able to invest time in or not. If we don’t stop to think about how valuable the idea is, we can all jump too quickly to either committing resources or having long discussions about potential solutions that go nowhere.

Other ideas are less exciting and feel more like a challenge we didn’t ask for. The customer wants a calendar; we don’t particularly want to build one, but we do feel we need to do something about the request.

Whether we’re chomping at the bit or reluctant to dive in, it helps to explicitly define how much of our time and attention the subject deserves. Is this something worth a quick fix if we can manage? Is it a big idea worth an entire cycle? Would we redesign what we already have to accommodate it? Will we only consider it if we can implement it as a minor tweak?

In rare cases where the scope is so big that a six-week project isn’t conceivable, we’ll try to hammer it down by narrowing the problem definition. If we still can’t shrink the scope, we’ll break off a meaningful part of the project that we can shape to a six-week appetite.

This principle, called “fixed time, variable scope,” is key to successfully defining and shipping projects. Take this book for an example. It’s hard to ship a book when you can always add more, explain more, or improve what’s already there. When you have a deadline, all of a sudden you have to make decisions. With one week left, I can choose between fixing typos or adding a new section to a chapter. That’s the tension between time, quality, and scope. I don’t want to release a book with embarrassing typos, so I’ll choose to reduce the scope by leaving out the extra section. Without the pressure of the fixed deadline, I wouldn’t make the trade-off. If the scope wasn’t variable, I’d have to include the extra section. Then there’d be no time to fix the quality issues.

We apply this principle at each stage of the process, from shaping potential projects to building and shipping them. First, the appetite constrains what kind of a solution we design during the shaping process. Later, when we hand the work to a team, the fixed time box pushes them to make decisions about what is core to the project and what is peripheral or unnecessary.

There’s no absolute definition of “the best” solution. The best is relative to your constraints. Without a time limit, there’s always a better version. The ultimate meal might be a ten course dinner. But when you’re hungry and in a hurry, a hot dog is perfect.

The amount of time we set for our appetite is going to lead us to different solutions. We could model a whole set of database columns in the fancy version, or just provide a flat textarea in the simple version. We could redesign the main landing page to accommodate a new feature, or we could push it back to a screen with fewer design constraints. We can only judge what is a “good” solution in the context of how much time we want to spend and how important it is.

Our default response to any idea that comes up should be: “Interesting. Maybe some day.” In other words, a very soft “no” that leaves all our options open. We don’t put it in a backlog. We give it space so we can learn whether it’s really important and what it might entail.

It’s too early to say “yes” or “no” on first contact. Even if we’re excited about it, we shouldn’t make a commitment that we don’t yet understand. We need to do work on the idea before it’s shaped enough to bet resources on. If we always say “yes” to incoming requests we’ll end up with a giant pile of work that only grows.

It’s important to keep a cool manner and a bit of a poker face. We don’t want to shut down an idea that we don’t understand. New information might come in tomorrow that makes us see it differently. On the other hand, showing too much enthusiasm right away can set expectations that this thing is going to happen. We may not be able to commit to it once we’ve put it into context with everything else we want to do.

Narrow down the problem

In addition to setting the appetite, we usually need to narrow down our understanding of the problem.

We once had a customer ask us for more complex permission rules. It could easily have taken six weeks to build the change she wanted. Instead of taking the request at face value, we dug deeper. It turned out that someone had archived a file without knowing the file would disappear for everyone else using the system. Instead of creating a rule to prevent some people from archiving, we realized we could put a warning on the archive action itself that explains the impact. That’s a one-day change instead of a six-week project.

Another example is the “calendar view” from the previous chapter. Everyone knows what a calendar view is. But unpacking it revealed tons of unknowns and decisions that would drastically affect the scope. If we only want to spend six weeks instead of six months building a huge calendar, how do we narrow it down?

In that case we flip from asking “What could we build?” to “What’s really going wrong?” Sure, a calendar sounds nice. But what is driving the request? At what point specifically does someone’s current workflow break down without this thing they’re asking for?

In the case of the calendar request, we called a customer who asked for this feature. Instead of asking her why she wants a calendar and what it should look like, we asked her when she wanted a calendar. What was she doing when the thought occurred to ask for it?

She told us she worked in an office with a big calendar drawn on a chalkboard wall. Her officemates marked when they were meeting clients in the handful of meeting rooms on the calendar. One day she was working from home. A client called and asked her to schedule a meeting. She had to drive to the office to look at the wall calendar. Traffic was terrible along the way, and in the end there wasn’t a free space that worked for her client. She could have saved an hour in traffic and a lot of frustration if she had been able to check for open spots on the calendar from her computer at home.

The insight wasn’t “computerize the calendar”—that’s obvious. What we learned was that “see free spaces” was the important thing for this use case, not “do everything a calendar does.”

This story, and others like it, gave us a specific baseline to design against. Basecamp had an agenda view of events. It worked for listing major deadlines and milestones but it wasn’t good for resource scheduling because you couldn’t see empty spaces on it. We narrowed down the need from “do everything a calendar does” to “help me see free spaces so I can figure out when to schedule something.”

We didn’t have a solution yet. But now we felt like we had a problem that was specific enough to spark an idea that could fit within our appetite. This led us to the simpler “Dot Grid” concept from the last chapter.

What if we can’t figure out a specific pain point or use case? Our appetite can also tell us how much research is worthwhile. If it’s not critical now and we can’t get our hands around the problem, we’ll walk away from it and work on something else. Maybe in the future a new request or story will pop up that gives us better insight into the problem.

When it comes to unclear ideas, the worst offenders are “redesigns” or “refactorings” that aren’t driven by a single problem or use case. When someone proposes something like “redesign the Files section,” that’s a grab-bag, not a project. It’s going to be very hard to figure out what it means, where it starts, and where it ends. Here’s a more productive starting point: “We need to rethink the Files section because sharing multiple files takes too many steps.” Now we can start asking: What’s not working? In what context are there too many steps? What parts of the existing design can stay the same and what parts need to change?

A tell-tale sign of a grab-bag is the “2.0” label. We made the mistake in the past of kicking off a “Files 2.0” project without really considering what that meant. Our excitement about improving a huge part of our app got the better of us. We know there were a lot of problems with our Files feature, but we didn’t ask ourselves what specifically we were going to do. The project turned out to be a mess because we didn’t know what “done” looked like. We recovered by splitting the project into smaller projects, like “Better file previews” and “Custom folder colors.” We set appetites and clear expectations on each project and shipped them successfully.

When we have all three things—a raw idea, an appetite, and a narrow problem definition—we’re ready to move to the next step and define the elements of a solution.