Heads up! This page uses features your browser doesn't support. Try a modern browser like Firefox or Chrome for the best experience.

Next: Write the Pitch

Remember that we’re shaping work for a fixed time window. We may trust from our experience that the elements we fleshed out in the previous chapter are buildable within the appetite (six weeks). But we need to look closer, because all it takes is one hole in the concept to derail that. Suppose we bet on the project and a team takes it on. If they run into an unanticipated problem that takes two weeks to solve, they just burned a third of the budget!

Even worse, sometimes you run into problems that don’t just delay the project—they have no apparent solution. We once bet on a project to redesign the way we present projects with clients on Basecamp’s home screen. We assumed the designer would figure it out; we didn’t do the work in the shaping phase to validate that a viable approach existed. Once the project started, it turned out to be a much harder problem than we expected. None of us were able to find a suitable design solution within the six weeks we budgeted. We ended up abandoning the project and rethinking it later.

Of course there will always be unknowns. That’s why we apply the many practices in Part Three so that teams tackle the right problems in the right order, leaving room for the unexpected. But that doesn’t mean we shouldn’t look for the pitfalls we can find up front and eliminate them before betting on the project. Before we consider it safe to bet on, a shaped project should be as free of holes as possible.

In terms of risk, well-shaped work looks like a thin-tailed probability distribution. There’s a slight chance it could take an extra week but, beyond that, the elements of the solution are defined enough and familiar enough that there’s no reason it should drag on longer than that.

However, if there are any rabbit holes in the shaping—technical unknowns, unsolved design problems, or misunderstood interdependencies—the project could take multiple times the original appetite to complete. The right tail stretches out.

We want to remove the unknowns and tricky problems from the project so that our probability is as thin-tailed as possible. That means a project with independent, well-understood parts that assemble together in known ways.

Fleshing out the elements of the solution was a fast-moving, exploratory process. It was more breadth than depth. In this step, we slow down and look critically at what we came up with. Did we miss anything? Are we making technical assumptions that aren’t fair?

One way to analyze the solution is to walk through a use case in slow motion. Given the solution we sketched, how exactly would a user get from the starting point to the end? Slowing down and playing it out can reveal gaps or missing pieces that we need to design.

Then we should also question the viability of each part we think we solved. We ask ourselves questions like:

For example, when we defined the To-Do Groups project, we introduced the idea of dividers in the to-do list: 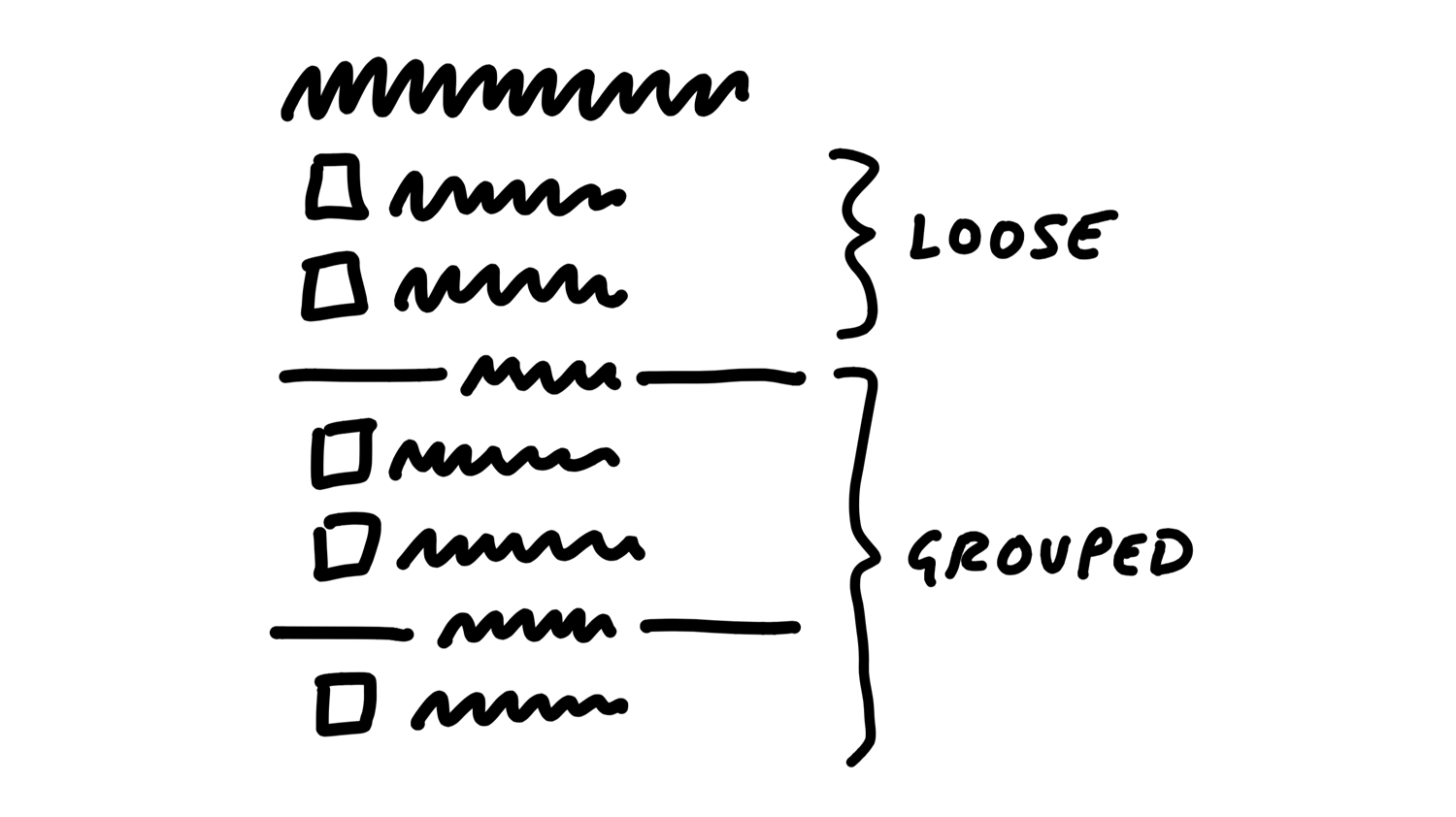 This was a hole in the concept. If we didn’t address it, we’d be pushing a deep design problem down to the team and unreasonably asking them to find a solution under deadline. It’s not responsible to give the team a tangled knot of interdependencies and then ask them to untangle it within a short fixed time window.

We knew from experience that changing the way completed to-dos render has lots of complicated implications in user experience, navigation, and performance. To remove uncertainty in the project, we decided to dictate a solution in the shaped concept. We would leave the completed items exactly as they worked previously. Instead of grouping or segmenting them, we would just append the name of the group to each completed item. It would be a little messy, but we justified the trade-off: it drastically simplified the problem, and we could still show completed items from a group on the group’s detail page. 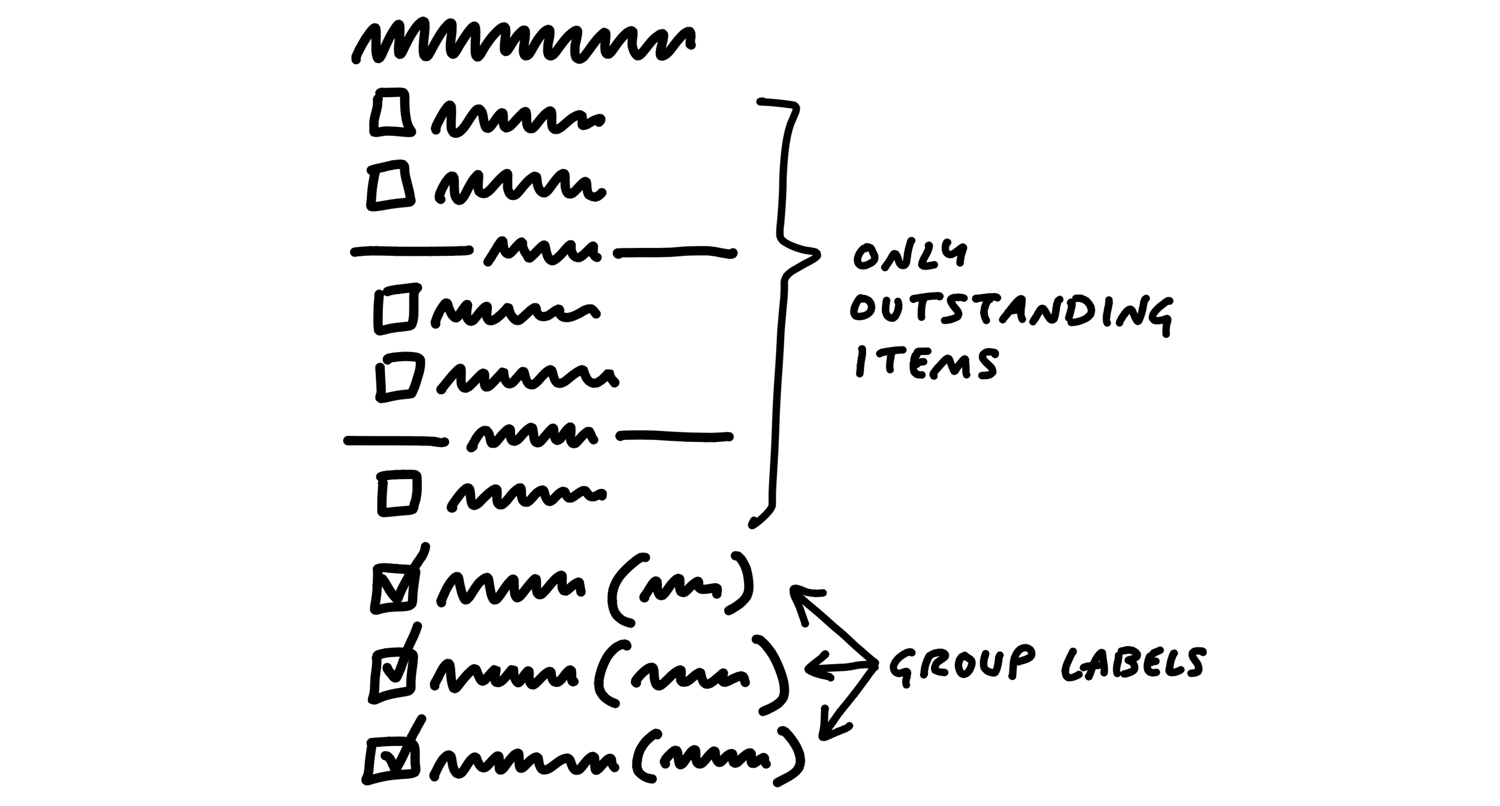 This is the kind of trade-off that’s difficult to make when you’re working inside the cycle under pressure. There are lots of reasons why a different design or a deeper reconsideration of completed to-dos would be objectively better. Why not try rendering them inside each group? A designer could reasonably think, “Maybe if I experiment with the styling a little more I can make them blend in better.” They could easily waste a few days of the very few weeks they have going down a dead end.

As shapers, we’re thinking less about the ultimate design and more about basic quality and risk. With the compromised concept we get to keep all the elements that made the project worth doing—the groups of incomplete items—and we get to cut off a big tail of risk.

Next, when we write the pitch for this project, we’ll point out this specific “patch” as part of the concept. That way nobody down the line will get tripped up on it.

Declare out of bounds

Since everyone on the team wants to do their best work, they will of course look for all the use cases to cover and consider them necessary. As the team gets more comfortable with scope hammering (see Decide When to Stop), this improves. But it’s still a good idea to call out any cases you specifically aren’t supporting to keep the project well within the appetite.

For example, we worked on an idea for notifying groups of people in Basecamp. Rather than checking off five programmers one by one, you could just click “Programmers” and they’d be selected for notification. As we looked at the product, we saw tons of places where this kind of behavior might make sense. If we let you choose a group when posting a message, why not when assigning a to-do, or mentioning people in the chat room?

We decided for the purpose of the project that the core value was narrowing down who to notify about a message. We explicitly marked off the other cases as “out of bounds” for the project and focused on the win we wanted: a faster flow for posting messages.

There may be parts of the solution we got excited about during the sketching phase that aren’t really necessary. When we designed the To-Do Groups feature, we thought it would be great to color-code groups. No doubt the page would look more interesting with color-coded group labels, and the feature might be more useful too. But we decided to flag this as unnecessary and cut it from the core of the project. We could mention it to the team as a nice-to-have, but everyone should start from the assumption that the feature is valuable without it.

Up to this point shaping has been a closed-door activity. Before you’re ready to write up the idea to share more widely, you might need input on some parts of the concept you aren’t completely sure about. There may be a technical assumption that you need to verify with someone who understands the code better. Or perhaps you want to make sure that usage data doesn’t contradict an assumption you’re making about current customer behavior.

This is a good time to grab some technical experts and walk them through the idea. Communicate that this is just an idea. It’s something you’re shaping as a potential bet, not something that’s coming down the pipe yet. The mood is friendly-conspiratorial: “Here’s something I’m thinking about… but I’m not ready to show anybody yet… what do you think?”

Beware the simple question: “Is this possible?” In software, everything is possible but nothing is free. We want to find out if it’s possible within the appetite we’re shaping for. Instead of asking “is it possible to do X?” ask “is X possible in 6-weeks?” That’s a very different question.

Talk through the constraints of how this is a good solution given the appetite, so they’re partners in keeping the project at the size you intend. And emphasize that you’re looking for risks that could blow up the project. It’s not just a “what do you think” conversation—we’re really hunting for time bombs that might blow up the project once it’s committed to a team.

Try to keep the clay wet. Rather than writing up a document or creating a slideshow, invite them to a whiteboard and redraw the elements as you worked them out earlier, building up the concept from the beginning. Stick completely to the concept you already worked out to get feedback on the work you’ve already done. Then once you’ve covered the work you already did, open it up and invite them to suggest revisions. Having seen this concept, do they have any insights about how to drastically simplify or approach the problem differently?

Depending on how the conversation goes, you may either have validated your approach or discovered some problems that send you back for another round of shaping.

De-risked and ready to write up

At the end of this stage, we have the elements of the solution, patches for potential rabbit holes, and fences around areas we’ve declared out of bounds. We’ve gone from a roughly formed solution with potential risk in it to a solid idea that we now hope to bet on in the future.

That means we’re ready to make the transition from privately shaping and getting feedback from an inner-circle to presenting the idea at the betting table. To do that, we write it up in a form that communicates the boundaries and spells out the solution so that people with less context will be able to understand and evaluate it. This “pitch” will be the document that we use to lobby for resources, collect wider feedback if necessary, or simply capture the idea for when the time is more ripe in the future.