Basecamp, in a nutshell.

Back in 1999 (pretty much forever ago, in Internet Years), we opened a web design company called 37signals. As 37signals, we launched several successful products, created and open-sourced Ruby on Rails, wrote a few best-sellers, and published thousands of posts on the Signal v. Noise blog.

In 2004, we created and launched a little project management tool named Basecamp. We built Basecamp to scratch our own itch: We needed a simple, usable program to help us stay organized, communicate with our clients and each other, and make it easier to finish projects together. Over time, Basecamp grew into something much bigger.

In 2014, ten years to the day that Basecamp launched, 37signals became Basecamp, a one-product company (read more on that here).

In 2020 we went back to being a multi-product company with the launch of our integrated email client & service, HEY. We built HEY to scratch another itch; we needed to communicate with people outside our company and the standard options were invasive, needlessly complex, and frustrating to use.

Today, millions of people all over the world have used a Basecamp product. With customers in nearly every industry and every country on Earth, we’re helping a whole lot of people communicate better and do their best work.

About Jason Fried and David Heinemeier Hansson, the founders of Basecamp 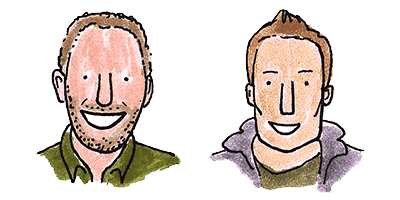 Jason Fried is co-founder and CEO of Basecamp. He co-wrote the bestsellers REMOTE and REWORK, speaks publicly around the world, and pens Inc. magazine’s “Get Real” column. You can follow @JasonFried on Twitter.

David Heinemeier Hansson is co-founder and CTO at Basecamp. He co-wrote REMOTE and REWORK, as well as Getting Real. In July 2004, he released Ruby on Rails, the infrastructure software used to build applications at Basecamp and thousands of other popular sites. Follow @DHH on Twitter.

The Basecamp Team from around the world

Basecamp’s international team of lovable weirdos has the freedom to live and work wherever they choose. Everyone on the Basecamp team is invited to write about business, design, programming, and the web on our Signal v. Noise blog.

Thanks for writing about Basecamp! When using our logo, we’d love it if you used the version shown below. (Go ahead, save it!) We’ve also got you covered if you need alternate orientations or different formats.

Even though we’re constantly updating the Basecamp app and making it better every day, here are screenshots you can use in blog posts, press releases, or anything else featuring Basecamp. Download desktop screenshots and mobile screenshots.

Download the entire Basecamp Press Kit which includes our logo and screenshots of our app within various devices.